I love this grand old Fig tree in the Botanical Gardens down here in Sydney,  often come down in my lunch break and have a snooze under it.  I wonder how old it is?  Judging by the width i'd say several hundred years.  According to this page it is a Moreton Bay fig tree (Ficus MacroPhylla ofcourse), and here is some more information from the fountain of knowledge.

More surfing planned at Bondi this weekend. I've found this great surfcam overlooking Bondi beach, and find myself staring at it allday long wishing i was there.

Been out surfing twice this weekend in Bondi and i'm in agony.  There was a 3 meter swell today and it was like being in a washing machine at times.  I've bought my first board, a second hand 7ft 6 inch SunRide epoxy, and 3.2mm Billabong wetsuit.

The first time i saw this advert i was in hysterics, and still am everytime i watch it, especially now having spent 5 years in Australia.

Auusies wouldn't give a Castlemaine XXXX for anything else!

Dude, i like went over the falls and totally pearled today.

After 2 1/2 hours of fighting a massive Bondi surf, being thrashed by rhino waves, and inhaling half of the sea I managed to ride about 7-8 of the big ones and loved every second of it.  By the end of it i was suffering from Peralitis* though.

It's a great sensation just gliding down a wave.  I know I'm going to ache so much tomorrow, but am definitely looking forward to next Saturday's session.

Currently reading  Diamond Age by Neal Stephenson, a bizarre postcyberpunk novel; watching "The Great Global Warming Swindle", a group of very prominent scientists explain if the planet is heating up, it isn't your fault and there's nothing you can do about it - very compelling; watching National Geographic Adventure Channel, and eating at the rather excellent "Eat Thai the republic" restaurant down Darlinghurst rd (this is a a big call, but I think it as good as if not better than the legendary Thai Thai Poh).

The propensity to drop into a wave and have the nose of the surfboard bury under water thus causing the rider to be pitched out from the face of the breaking wave. Generally resulting in the surfer being worked or rag dolled.

After nearly 5 short years I'm a few weeks away from finally being able to apply for this. On the way back from London a few weeks ago I was looking at my passport, and it had something like 9 different Australian visas plastered inside it; 417, 457's and permanent residencies. I'd forgotten about half of them.

It's the same ordeal for every ex-pat living down here, never ending hassles with the Immigration department. On television, the Australian Government advertise how easy it is to become one of them now, but in reality you need atleast 4 years of living in the country and setting yourself up is far from easy. Still, it has definitely been worth it, and I reckon the passport will be quite a milestone for me.

Over the jet lag now, and back into the swing of things now. It hasn't stopped pissing down with rain for the last week, so Sydney makes even London look like a bright cheerful city at the moment. On Friday I just signed up for the marathon again this year. It's in mid-September again and I'm already beginning to have doubts.  Doing the marathon itself is great, you get a huge buzz from everone cheering you on and ultimately crossing the finishing line, it's just the 2 months training leading up to it that gets abit tiresome.. running 4 times a week.

Survival theme this week; i've been watching the 2nd series of Man vs Wild, Bear Grylls has been in the Everglades, Iceland and Mountains of Mexico�and Outback in Australia so far.  I'd recommend this tv programme to anyone who hasn't seen it yet. I've also been reading Miracle in the Andes- 72 Days on the Mountain and My Long Trek Home, the story of a plane crash involving a Uraguyan rugby team, cannibalism and a amazing story of survival an endurance.  I think the movie Alive was based off this.

Any country with "democratic" in the title, isn't.

I think travelling West to East seems to intensify your jet lag for some reason, perhaps because is more disruptive, or runs counter to the body's circadian rhythm.  Either way having just travelled for 36 hours non-stop from Norway to Sydney on Friday I'm just completely exhausted mentally and physically.  Was great fun, and we really didn't want to come back this time. You really get the feeling that London in the summer is really one of the worlds best cities, so much going on, and I loved seeing new spins on old haunts.  Oslo/Drammen in Norway has so much natural beauty and a really good vibe to the place.

I've uploaded my photos from the 3 week trip here, and when I'm in a bit better shape write some comments on each one. 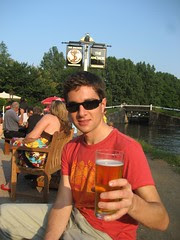